It frequently happens that “integers” for test-taker are associated only with positive whole numbers, but actually they also include positive and negative numbers as well as 0. On the GRE there are a lot of problems involving integers and you should be familiar with their properties, since most of these problems are underrated by test-takers and have many hidden pitfalls.

Note that a variable (such as x) can have either a positive or a negative value, unless there is evidence otherwise.

Properties of Negative and Positive

Now, when you multiply or divide two numbers, positive or negative, follow one simple rule: If Signs are the Same, the answer’s poSitive but if Not, the answer is Negative: 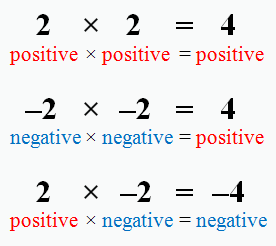 Notice that absolute value is always positive, because it disregards the direction (positive or negative) from which the number approaches 0 on the number line. Note: |0| = 0 is the smallest possible absolute value.

Note: 0 is even! Negative integers are also either even or odd.

Properties of Odd and Even

The GRE tests your knowledge of how odd and even numbers combine through addition, subtraction, multiplication, and division. Rules for adding, subtracting, multiplying and dividing odd and even numbers can be derived by simply picking numbers and testing them out. While this is certainly a valid strategy, it also pays to memorize the following rules for operating with odds and evens, as they are extremely useful for certain GRE math questions.

Efficiently refreshing your knowledge base of math is one of the more important aspects of any quality GRE preparation. For instance, the order of operations is certainly something of which almost all of us had a decent understanding at one time or another. And the first thing which comes to mind when talking about operations order is a common mnemonic PEMDAS: “Please Excuse My Dear Aunt Sally.” Let’s further examine this prioritization process:

Tags: Negative and Positive, Odd and Even, PEMDAS, Properties of Integer